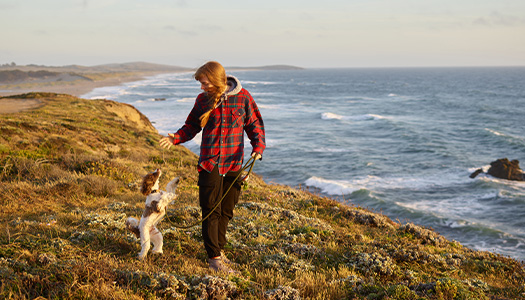 A Family Physician returned to the Maritimes to set up a practice in the remote community in which she grew up. While she worked in Toronto, she longed for the Nova Scotia’s beautiful vistas and the strong sense of community. When the community’s family doctor retired, she knew this was her chance to go home.

The differences of rural practice.

After working in Toronto, the transition to practicing in a small community, away from the big hospitals posed challenges. She was no longer able to easily send people to the emergency room and patients were reluctant to drive 4-5 hours to go to see a specialist or get a diagnostic test. She also had few connections in the medical community. She felt clinically isolated.

Her patients had complex conditions, and she worried that they were being sub-optimally treated. She tried to make referrals for her patients who needed to see a specialist, but the waitlists were long, and patients preferred to get treatment with her, rather than driving into the city.

Plugging into a clinical network

She had joined a physicians Facebook group and heard of the clinical network of physicians doing phone consults through Virtual Hallway. She checked out the website but didn’t sign up initially, as she wondered whether it would be another piece of software she would have to learn to use.

Later, she heard about an online lecture about Frailty being held on Virtual Hallway led by Dr. Ken Rockwood and decided to watch. After listening to the lecture, she decided to set up for an account. And then, within minutes, she sent her first consult request, a consult with an Internal Medicine specialist. “I couldn’t believe how simple it was, just a few clicks and I had a booking to talk to a specialist.” The patient had been on a waitlist for eighteen weeks, and the patient’s kidney function was gradually deteriorating.

The next day, the Internist called, on time. “It was great. He was so easy to consult with. We worked through the case, and we came up with several steps that I was able to implement immediately.” Within a few weeks the patient’s creatinine was coming back up, and her blood sugar control was improving.

After that first consult, she made a couple more requests, and then a few more. Now, she sends an average of three consult requests per week. Her most frequently consulted specialties are Internal Medicine, Psychiatry and Gastroenterology. Her patients are now able to get specialty level input within days, while staying in their community.

While she prefers completing and booking consults herself, she has her administrative staff download the documentation and import it into her electronic medical record. The extra income was a bonus.

“The best part has been getting to know my colleagues.” She has now built relationships with a few specialists, and the conversations have been concise and collegial.

In addition, she has found that consulting with a specialist earlier on in the patient’s course has led to fewer complications and improved outcomes. And ultimately, fewer patients have needed to go onto a specialist’s waitlist and have received care sooner.

1 2 3 Next »
We make specialist phone consults easy and accessible.
Get Started